We are the New Cult on the Block! 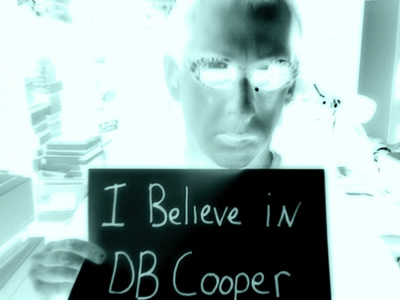 On November 24, 1971, DB Cooper jumped from a plane over Washington State with a $200,000 ransom. He was never found. In fact, he never hit the ground. He attained enlightenment in mid-space and transformed into Light.

In 1993, the DB Cooper Church of Perpetual Grace became the new Cult on the block, dedicated to transmitting the teachings that DB Cooper revealed psychically to Larry Hoobard and Jack Parsons. With this new knowledge, they developed the most complete 12-step system of metaprogramming to be inflicted on the human race – PsiOntology. Cooper’s teachings and revelations were compiled into the Book of Leap.

The Church went on hiatus after the shock of the first two seasons of Prison Break. The inner circle remains in a self-imposed exile.

We only believe in two things - tripping balls and shooting loads.